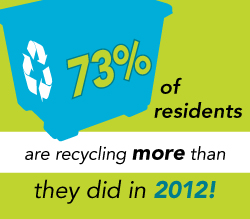 In October 2017, the MARC Solid Waste Management District contracted with ETC Institute to conduct a recycling survey of residents in the nine-county Kansas City metro area. The survey evaluated current recycling activities and knowledge to determine what recycling services residents would like to see in the future, and determine focus areas for expanded services and outreach priorities. The survey also looked at how citizens’ values, behavior and awareness levels have changed since the 2005, 2008 and 2012 surveys.

However, since the 2012 survey, satisfaction decreased in several areas including glass container recycling services. This is not surprising, given that, since 2009, the only widely available option for recycling glass in the metro area has been drop-off collection. Satisfaction has also decreased with the lower availability of drop-off recycling locations. Several communities (eight in the last two years) have closed their recycling centers and many schools and churches have closed their recycling drop-off bins to the public due to increased costs.

Most residents support public policies to improve recycling and waste reduction. Since the 2012 survey, residents also showed increased support for local government to:

However, many respondents are unwilling to pay for trash collection services based on the amount of trash set out for disposal (46 percent). In fact, since 2012, there was a significant decrease in the level of support for cities and counties implementing pay-as-you-throw programs (down 12 percent).

The services residents would most like to see offered or expanded in their community are: glass container recycling, household hazardous waste collection, computer/electronic recycling, bulky-item pickup and expanded curbside collection service. More than half of those surveyed indicated that they would be willing to recycle food waste through curbside programs.

Finally, residents were asked if they had ever put something in a curbside recycling bin that they weren’t sure was recyclable — 53 percent indicated that they had. And 60 percent of residents reported they were recycling “everything possible.” Given the high contamination rates in curbside recycling and the fact that “everything possible” doesn’t account for all the additional recyclable items respondents are unaware of, the MARC Solid Waste Management District is going to double-down on helping residents not only to recycle more, but recycle better in 2018.

The full survey is available on the district’s website.