Did you toss something into a trash can today? If you are like most people, you probably did — on average, about seven pounds’ worth. Have you ever really thought about what you throw away? The Missouri Department of Natural Resources (MoDNR) has thought about it and has studied it.

In September 2016, MoDNR began field work on a statewide waste composition study to better understand the types and amounts of materials sent to landfills. This study was completed in 2017.

The study involved collecting and sorting more than 250 samples of trash generated by households, institutions, businesses and industries — otherwise known as “municipal solid waste.” Each sample weighed more than 200 pounds and was hand-sorted into 48 categories. By the end of the study, more than 7,000 pounds of waste from 16 transfer stations and landfills was sorted and categorized.

What do the results by weight show? You may be surprised:

The chart below reflects the composition percentages of the nine broad material categories.

The top ten components of residential, commercial and institutional waste are listed below. When summed, they account for over 59 percent of the overall municipal solid waste tonnage.

Municipal solid waste accounts for approximately 67 percent of all of the waste sent to landfills for disposal. The study also evaluated other waste streams including construction waste, demolition debris, industrial waste, special waste and “other” waste. The chart below illustrates Missouri’s combined waste stream. 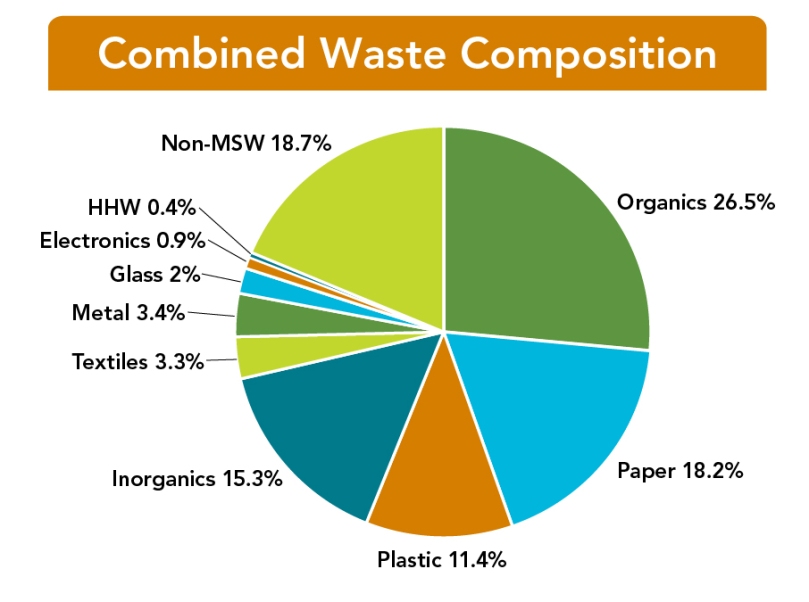 This is the third time that Missouri has conducted a waste composition study, with earlier studies conducted in 1998 and 2008. If you would like to learn more about the types and quantities of solid waste disposed of in Missouri landfills, all study information can be found on the MoDNR website.