A: The estimated amount of e-waste generated worldwide that year. 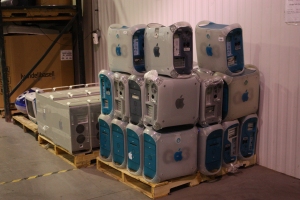 The world will generate an estimated 71.1 million tons of used electrical and electronic products in 2017 — an increase of more than 30 percent over 2012 levels — according to a study published by the United Nations organization StEP (Solving the E-Waste Problem). Researchers evaluated the global magnitude of annual e-waste generation and presented the results on this interactive world map. The map uses 2012 data from 184 countries.

In 2012, the world generated almost 53.9 million tons of e-waste, an average of 43 pounds for each of the world’s 7 billion people. The U.S. generated the most waste with 10.4 tons (about 66 pounds per person) and China came in second, with 7.9 million tons (about 12 pounds per person). For those of you keeping track at home, this means the U.S. generates nearly 20 percent of the world’s e-waste.

A companion study published in tandem with the StEP report provides a detailed analysis of the generation, collection and export of some used electronic products in the U.S. For example, in 2010, U.S. e-waste included nearly 258.2 million whole-unit computers, monitors, TVs and mobile phones totaling 1.6 million tons. The study found that a majority of materials collected were mobile phones, but that TVs and monitors made up more than half of the total weight. Of the e-waste generated, Americans recycled 66 percent of the total units, but only 56 percent of the total weight. This suggests that mobile phones are recycled more frequently than heavier items such as TVs and monitors.

In Kansas City we are fortunate to have numerous facilities that recycle e-waste. Find a convenient location by visiting RecycleSpot.org.